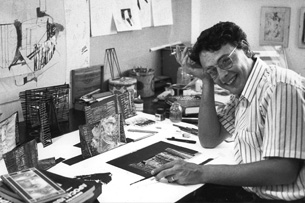 Lecturer at the Academy of Fine Arts in Venice, where he has held the chair of artistic anatomy since 1984, he dedicates himself to drawing and sculpture; since the 1980s he has also been involved in theatrical scenography and museum set-up.
He has collaborated on theater projects with various companies, including the Compagnia Teatro Stabile del Veneto for classical shows at the Teatro Olimpico in Vicenza, La Piccionaia and the Naturalis Labor Dance Company.

He has also curated the set up of exhibitions in exhibition spaces including the Scuderie del Quirinale in Rome (Tiziano, 2013; Lorenzo Lotto, 2011; Giovanni Bellini, 2008), the Civic Art Gallery of Ancona (Medusa, Between light and emotion, 2013) , the Palazzo del Monte di Pietà in Padua (Bembo and the invention of the Renaissance, 2013; Guariento and the Padua of the Carraresi, 2011), the Palazzo della Gran Guardia in Verona (scenographic installation and study for wooden models for Mantegna and Arti, 2006), Palazzo degli Alberti in Prato (Jacopo Bassano, 2011), Museum of Rural Civilization in Rocca di Montemassi (Grosseto) (museum set-up); Palazzo Bonaguro (Ezzelini, 2001) and the Civic Museum (Italian twentieth century, 2012) of Bassano del Grappa. In Vicenza he oversaw the museum set-up and arrangement of the works of the Civic Art Gallery of Palazzo Chiericati in Vicenza and the temporary exhibitions held there. He oversaw the rearrangement of the church of SS. Ambrogio and Bellino, converting it into the new AB23, a contemporary art center for young international artists.